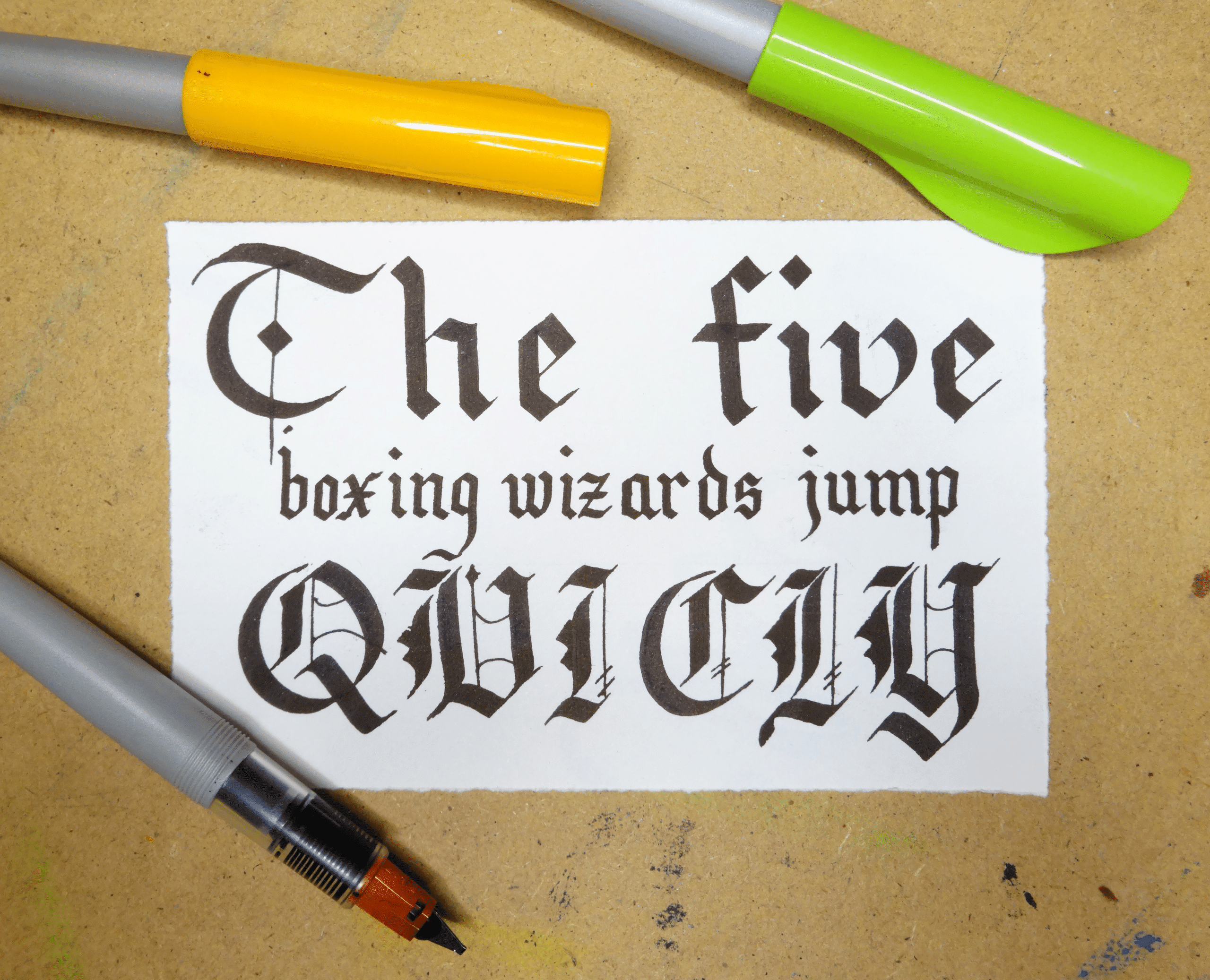 Are there better words than others to practice your lettering and calligraphy? The answer is both yes and no. Let’s go over some specific examples and see why some work for a few situations and why they might not be the best choice sometimes (in my opinion).

The Science Behind the Best Calligraphy Words

If you ever studied graphic design or are someone who likes to look and search for different fonts on the internet, What I’ll say now won’t be a surprise to you. Nonetheless, you might not know why the industry has a certain standard for these. First, let’s call these by name. I’m talking about Lorem Ipsum and “The quick brown fox jumps over the lazy dog”.

If you have ever heard of these, you might know why I mentioned them. For those that don’t, let’s go over both examples in more detail to understand them a bit better.

A lot of people have seen this sentence, but no one knows what it means for sure. So, where does it come from?

According to lorem Ipsum’s “official” open-source website, it is believed that it comes from a classic Latin literature piece from 45 BC, called “de Finibus Bonorum et Malorum” (The Extremes of Good and Evil) by Cicero.

In 2014, a news piece from The Guardian attempted to close the mystery of what those words mean. This is what lorum ipsum was found to mean.

So, here is the important part, do you really need to know what the words mean? And why is it used so much anyway? And when? Let’s answer these.

1st, you don’t need to know what the words mean. Although I recommend that you use the website above to generate your lorem ipsum passages since there are a few ones online that have mockery among the text.

2nd, why and where is this used? Usually, it’s used in typography, to test fonts, layouts, spaces, all of those design elements. When designing websites or designing magazine layouts, you don’t normally have the final text available yet. Lorem Ipsum is used as a placeholder. Why? Why not? The point is for the reader, or the designer, or the client, not to be distracted by the text displayed since they can’t understand it anyway. So, they focus mostly on the design, which is the intended purpose. Although, I must say I had clients that didn’t understand this and became very preoccupied with the “weird” text on their website. Well… moving on. It is believed that this text has a fair distribution of letters, opposed to not having some “test test test test” repetition. Are there other texts better than lorem ipsum? More balanced regarding the letter and word distribution? Probably. But this one has been around for a while and most people don’t go around looking for other examples. It’s already there, you can generate as much text as you need… it’s just that easy.

Now, is this the best example to use in calligraphy? Probably not. It depends on what you need the text to be like. I’d say most times in calligraphy you want smaller passages, not big sentences, or chunks of text. Or if you want to try a more versatile passage, regarding the types of letters you have (like including wider and slimmer letters, ascender loops, descender loops, things like that). If this is the case, what can you go for? 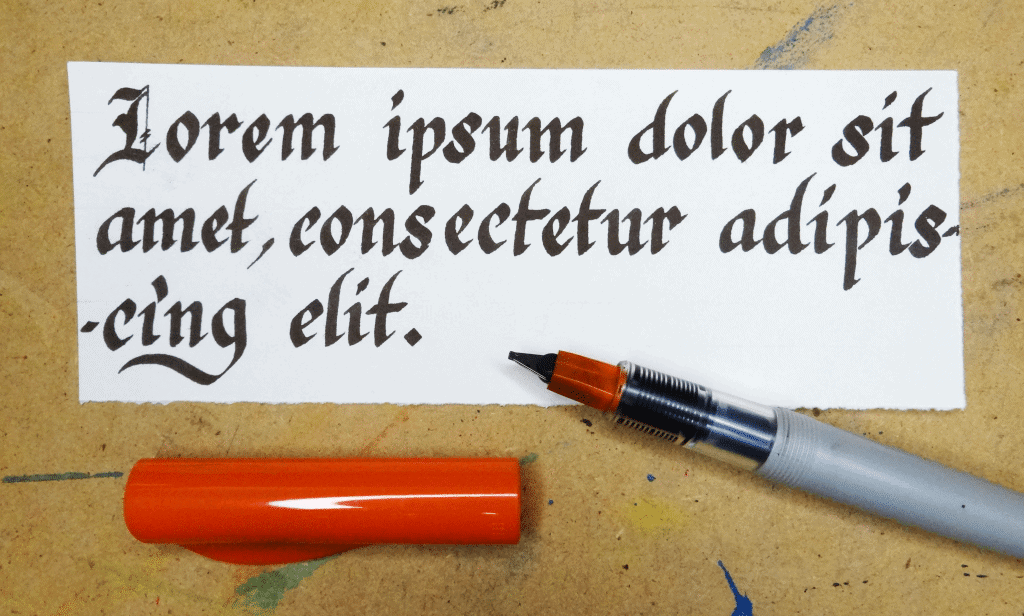 If you have searched for fonts in the last few years (on websites like Google Fonts, you might have come across this sentence quite a lot.  When seeing what a font looks like, you usually have the same sentence as an example on every font on the page. That way it’s easier to compare the various fonts. But why this one? This explanation is much cooler than lorem ipsum’s, since its justification makes a lot more sense and is quite fascinating if you enjoy wordplays.

“The quick brown fox jumps over the lazy dog” is a pangram. A pangram, or holoalphabetic sentence, is a sentence that showcases all the letters in the alphabet at least once. 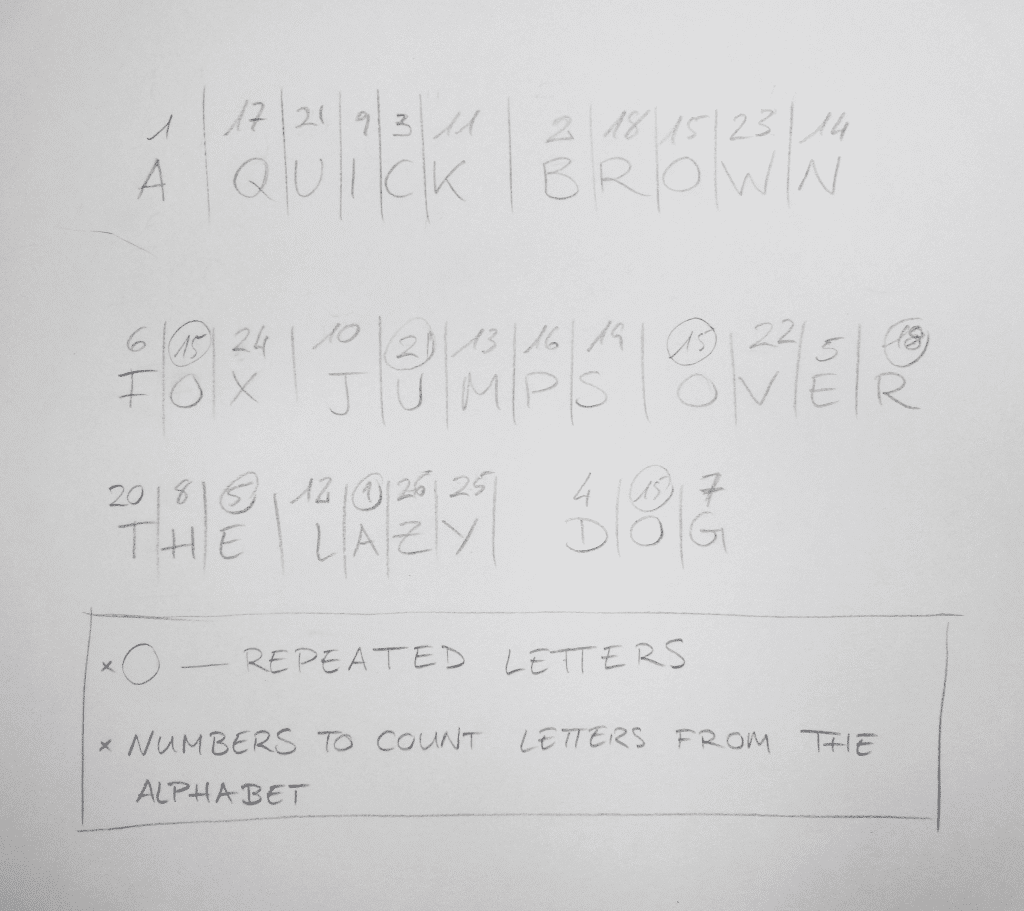 As you can see above, in case you were doubting, it is true!

Why does this matter? Well, the most important reason is that you can see how every letter of a certain font or calligraphy style looks like. And if you do it a lot, and with different pangrams, you train every letter. At least once. It’s a good way of practicing without just repeating the alphabet in order over and over.

Here are some other pangram examples:

The sentences may still feel a bit long. If you are looking for smaller practices, this is still not for you. But I thought it was better to start with a more professional option based on actual design principles to introduce this theme. Now let’s jump to actual word-by-word comparison. 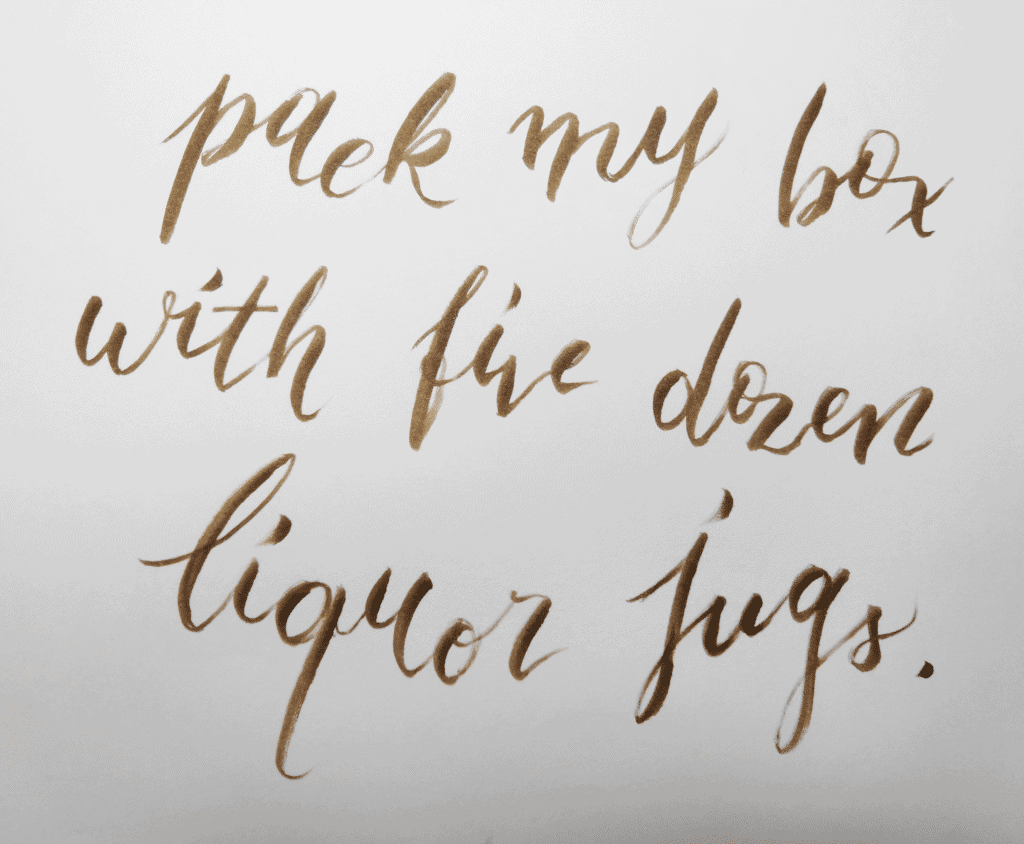 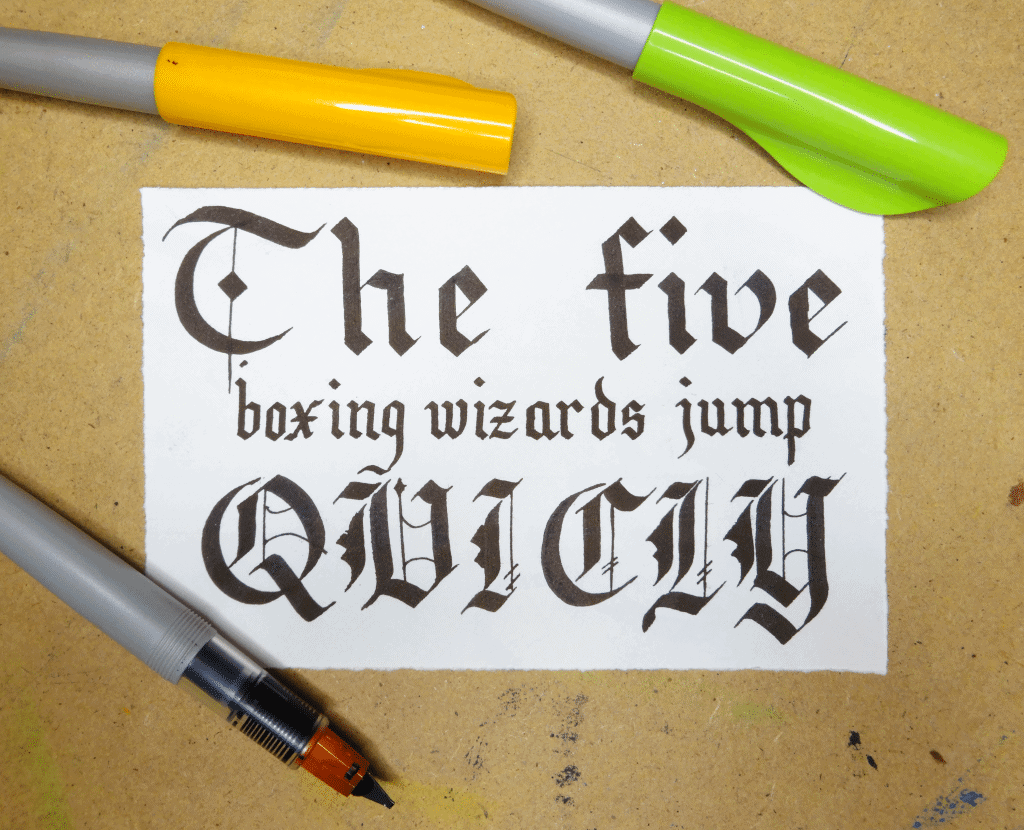 So, are they the Best Calligraphy Words for you?

This question isn’t quite as easy to answer as it sounds like. Not only because I believe you should trust your gut, most of the time, but because you may want something a bit more specific and tailored to your needs. Let’s talk about both situations.

Personally, I have a few words I start with, regardless of the outcome I’m looking for. Especially when trying new brushes (digitally) or new pens (see our guide on pen usage) and brush pens (learn more about brush calligraphy here). When you don’t know what the writing will look like using a different tool, you must start with something. My something is my name. Not because I’m self-centered, but because it’s one of the words I’ve written more in my life. Think about it. How many times do you write your name throughout your lifetime? In school tests, official documents, signatures in postcards and presents, the list goes on and on. Your name is something you don’t think about when writing it. It comes naturally. It’s intuitive. That’s why it is my starter word.

But that doesn’t last. My name isn’t that long, and I like to try other things out. And so should you! My second tries are usually “Thankful” or “Merry Christmas”. I’m not that religious, but I love Christmas. And both of those options bring me joy. And as I like to state here, you should push for the things you find joy in. Even in the little details. Because training calligraphy may be at times stressful, or boring. It’s good to write about things that you feel good thinking about and putting that out in the world. 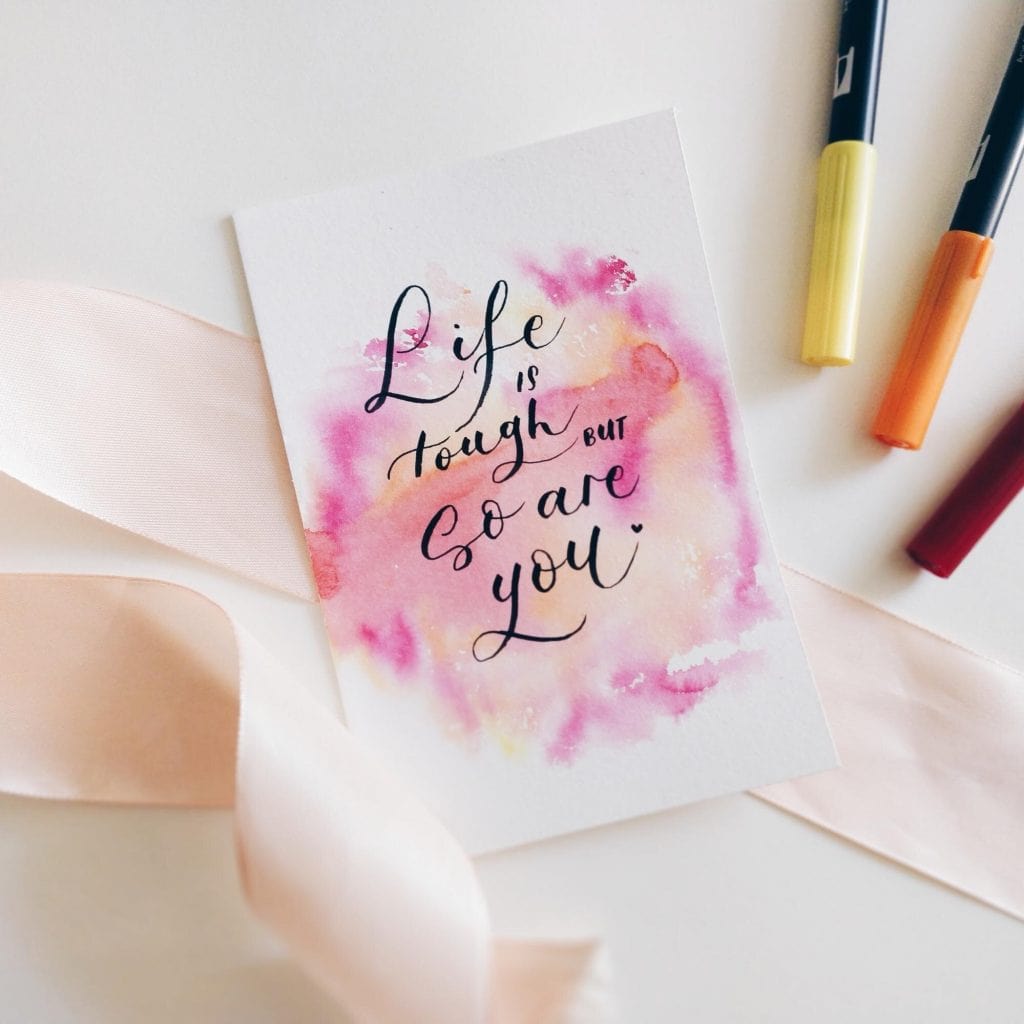 Hence why, my calligraphy words will probably not be the same as yours. I invite you now to think about some words you like. Try writing them out and test how it feels like. You’ll quickly learn if they work for you or not. If they don’t, repeat the process until it does.

Finally, there are moments where you need to practice things that are a bit more versatile. Like I said above, you might sometimes what to try words featuring ascender and descender loops, crossbars, flourishes, etc. See the example below: 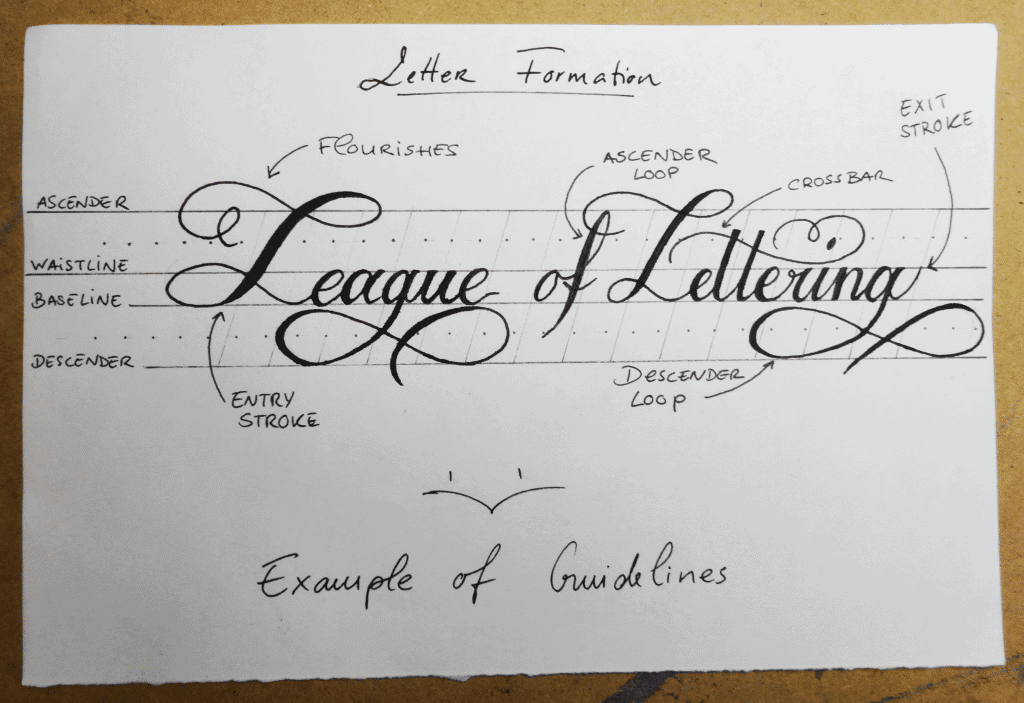 I will leave some calligraphy words here that fit most, or all, of these details:

Some of these seem a bit obvious but trust me when I say it’s good to have a little list of good words. Some days the blank paper stares at us and makes us forget what we ate 30 minutes ago. It’s good to alleviate the pressure by starting the process as fluently as possible. 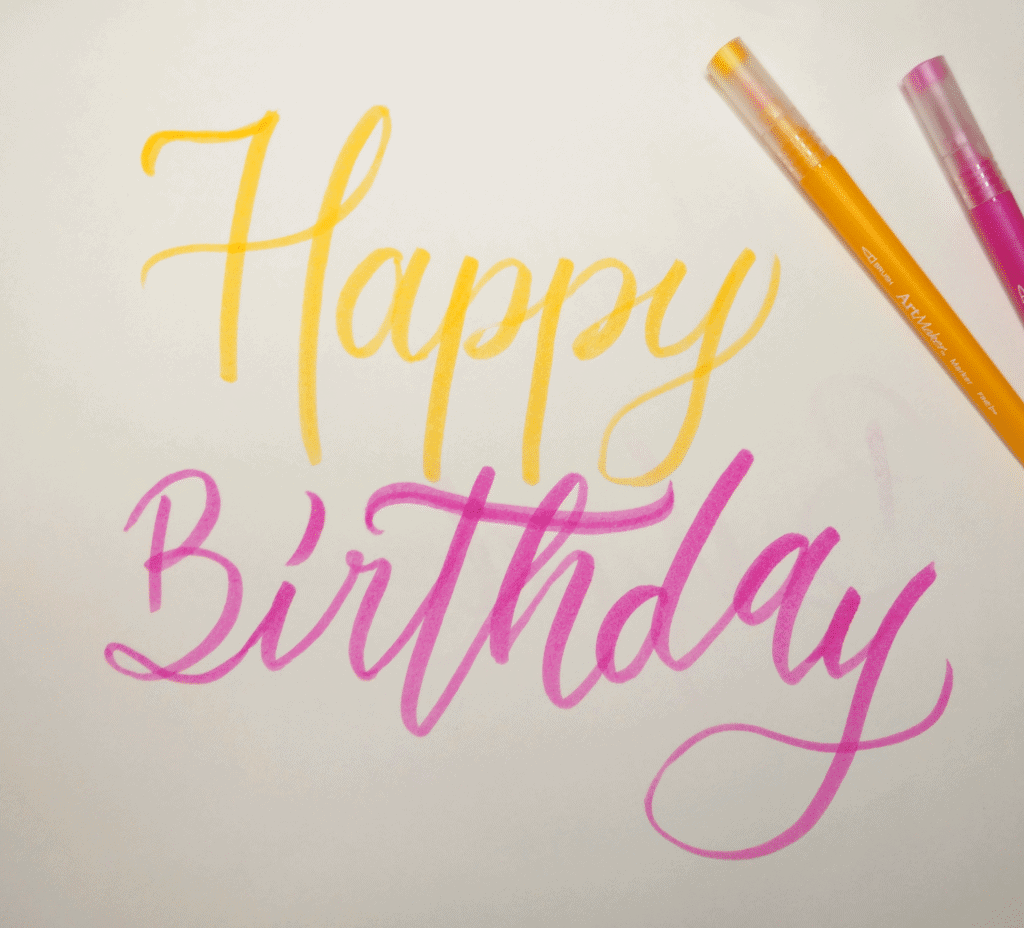 Let me conclude by saying that, even though there are a few words more suited for some situations and some practices professionals use, they may not be the best for you. Sometimes the words that touch you most or that come to you naturally help your workflow better than if you put much thought into what you’ll write. As we’ve seen, some calligraphy words are better for this than others. But ultimately, on most occasions, just choose a few and go with the flow. Or practice with “The quick brown fox…”, or some other sentence that makes your hand flow when writing calligraphy, and have it come naturally to you over time. 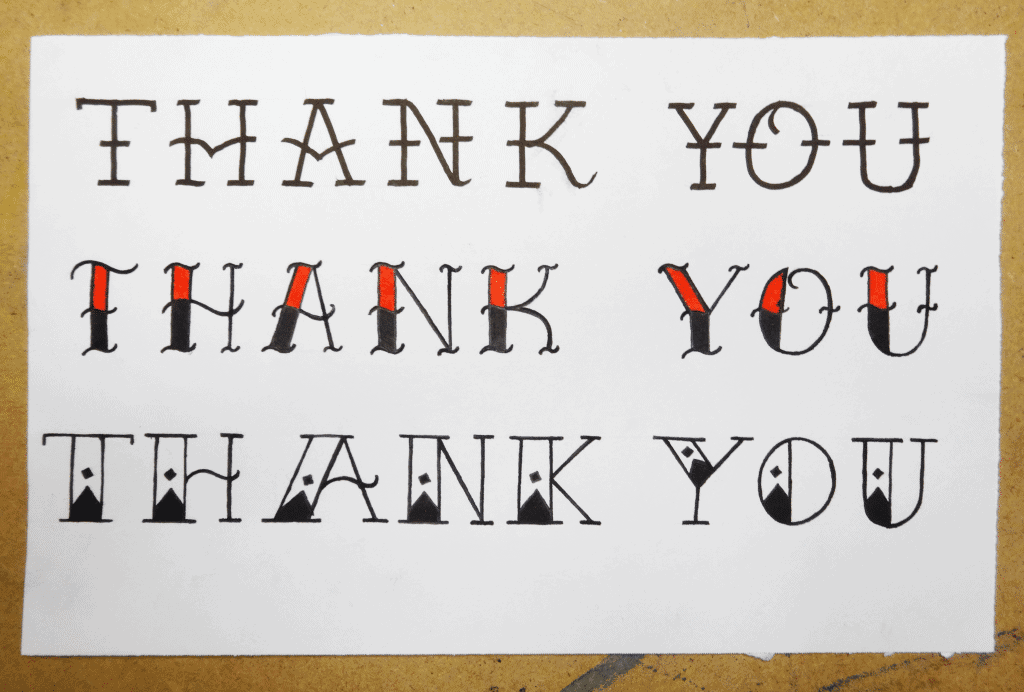